With more data now available since the previous blog post, further road safety impacts of COVID19 can be seen in different countries (or in some cases, cities) with data available. Given each country has responded differently to COVID19 and at different timescales, no overall patterns can be observed. However, there have been drastic reductions in road fatalities in many countries.

The limited data availability hereafter also highlights that countries and cities reporting timely road traffic accident information (i.e. provisional monthly data one or two months after the reference month) are very much the exception. Dozens of UNECE countries, covering hundreds of millions of people, do not publish any timely road safety data. COVID19 has highlighted that annual data are not sufficient for monitoring events in real time. There are some interesting examples of countries responding to this challenge by publishing transport statistics quicker than usual, prioritizing timeliness over typical verification techniques, and countries may wish to explore this strategy for monitoring road safety in the weeks and months to come. This is particularly pressing given the wide range of pedestrian and cycling infrastructure improvements being implemented in many cities.

With lockdown only starting on 17th March, April was the first full calendar month that any road safety impact could be fully present in France. And indeed the traffic fatality reduction was striking, with a 56% year-on-year drop in fatalities in France (Metropolitan), and even a 33% drop compared to March 2020's low figure . It is likely (with official traffic data not available), however, that traffic volumes decreased by an even greater amount than this.  And so this positive cut in road fatalities needs to be seen in the context of a large decrease in exposure (measured in vehicle-km or passenger-km). 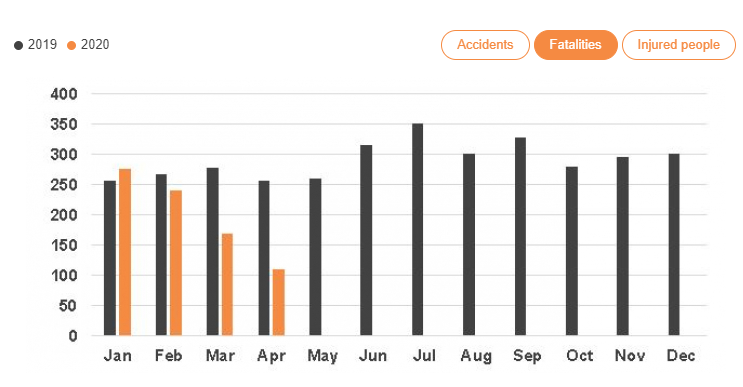 There were seven fatalities in April 2020 in Ireland. This number is below average compared to April in previous years, but not close to any historical lows. It is however, the lowest monthly fatality number since May 2018. 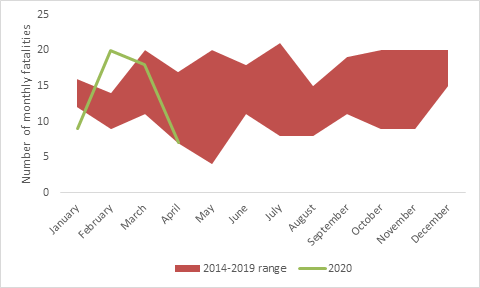 18 road fatalities occurred in March on Israel’s roads, the lowest figure since September 2018. As can be seen from the graph, each month of 2020 has so far been safer than the same months in 2017-2019. 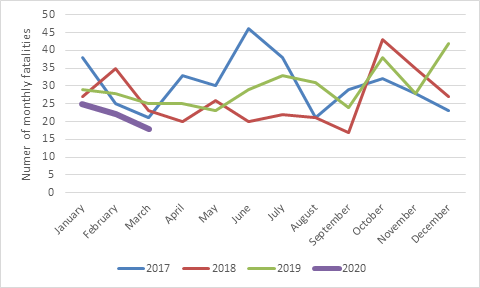 Data for Sweden in April show 17 fatalities in the calendar month, which is completely in line with the April data for the three previous years. It is important to note that Sweden implemented much less strident restrictions in movement than other countries.

Nine people lost their lives on Greater London roads in April 2020, a 36% decrease on both March 2020 and April 2019 numbers. Longer time series comparisons are more difficult to make due to differences in methodology between the provisional and the finalised historical data. 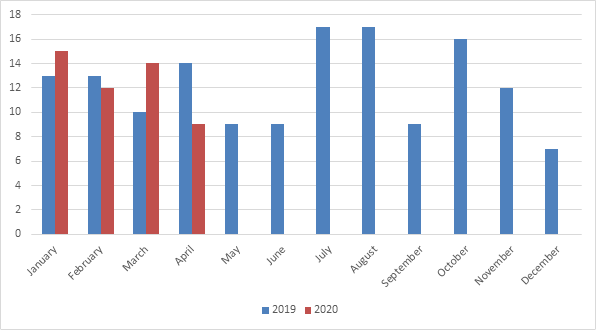 The National Safety Council has published monthly estimates of road traffic fatalities, by state, up to March 2020. These data have been combined with vehicle miles travelled to show that, despite March 2020 seeing 5.4% less fatalities than March 2019, this is actually a 14% increase in terms of fatalities per vehicle mile. 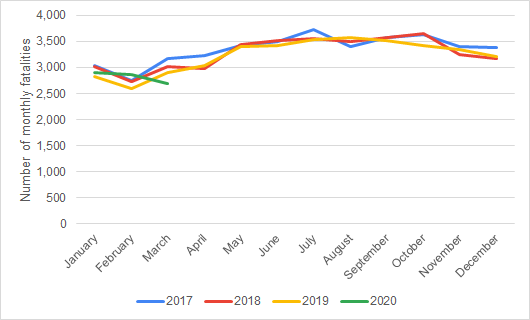 Data for New York City (recorded by the NYPD) showed 13 deaths in April. While this is not a historically low number (March 2016 saw 11 fatalities for example), when considering seasonality it is the lowest April value going back to at least 2013 (and likely much earlier). 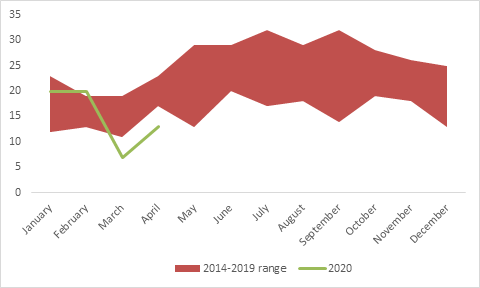 Another United States city that has timely road accident data is San Francisco. Data are available for each month of 2020, and also a five-year average for 2015-2019 is given for each month (hence why non-integer values appear on the below graph). 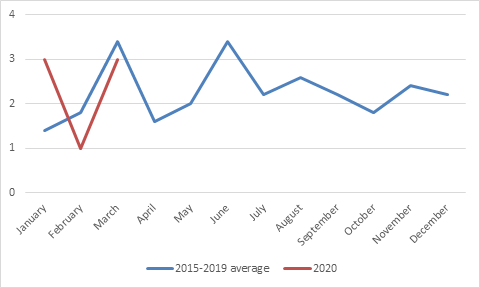