Poland adopts its own national classification of risk areas, hence travel restrictions for Poland are not based on the common "EU Traffic Lights" map.

Is a coronavirus test required?

Is a quarantine required?

All travellers arriving in Poland by plane, bus, or other means of public transport, are required to quarantine for 10 days, counting from the day following the day of entry.

Travellers who have been vaccinated for COVID-19 are exempted from compulsory quarantine (a certificate of vaccination is needed).

Until 31 January, stricter rules are in place. Rules and restrictions

Wearing masks is compulsory in public places across the country. Only people who have a medical certificate or a document confirming:

can be exempted from this requirement.

In the following places it is not mandatory to cover mouth and nose:

A minimum distance of 1.5 metres is required between people. The following categories are excluded from this requirement:

- parents with children requiring care (up to 13 years of age);

- people living together or forming a joint household;

- people with a certificate of need for special education and their caregivers.

Revised provisions on the cross-border shipment of waste in Poland

A foreign entrepreneur, prior to commencement of activities in the scope referred to in Art. 50 (1) of the Act on waste (including transport of waste), is obliged to submit an application and obtain an entry in the register of Databases on products and packaging and on waste management ("BDO").

A foreign entrepreneur who has established a branch in the territory of the Republic of Poland shall submit an application for entry in the register in the BDO system through a person authorized to represent him, to the marshal of the province competent for the seat of the branch.

Detailed instructions on how to submit an application for entry to the BDO can be found here.

After obtaining an entry in the Register-BDO, in order to perform activities in the BDO system, e.g. updating data in the entry, keeping waste records or reporting, it is necessary to log in to the BDO system via the National Electronic Identification Node (WKIE). A foreign entrepreneur or a person representing him does not have to be a Polish citizen to be able to log in via WKIE. The identity of the person authorized to represent in WKIE may be confirmed by means of a trusted profile or a bank connected to WKIE. In both cases, a citizen of a foreign country must have a PESEL number. The method of obtaining a PESEL number and establishing a trusted profile is described in the information here.

Alternatively, foreigners may act through a person authorized to represent or an attorney who has a PESEL number (not necessarily a Polish citizen). 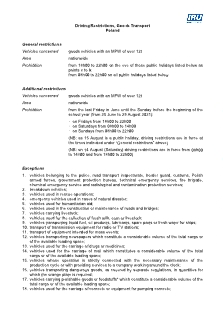